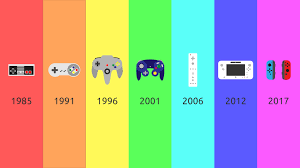 The internet has been a major part of everyday life, but nothing is dominating as much as games. So, what made games what we see them as today? How did these ideas become a big subject in people’s lives?

“Ok well how gaming has changed over time is due to the advanced technology allow players to do alot. From the first gaming system where we was only able to press buttons but compared to now we have Virtual Reality systems to make it feel that we are in the game.”Said Zachary Woods

From pixels to live-action or 3D games have been taking the world by storm except how and what makes them so eager to play for hours on end. It can be a lot of things the type of game, visuals, the characters it can be anything you can think of when it comes to games. Many companies battling it out to make better games and consoles with every year that goes by.

“I think gamers look for in video games is entertainment and it’s something they can call a comfort zone.”Said Zachary Woods

Some Games like Mario for example have been around for a lot of people’s childhood. This is due to it being able to adapt to the changing audience over time and take some leaps others would not think of with getting success. Then there are others like Balan WonderWorld that try to leap big but go way too far.

“To me it’s a mixture cause on the positive side the internet can connect people from around the world to play games with. On the negative side gamers sometimes have to with lag which interrupts their game making hard for them to do anything.”Said Zachary Woods

The Media is an ocean of information, not all of it true. While others dive into the code to leak information about the game which can help in promoting or ruin big reveals within the game. To counter this game developers purposely make a pirated version of the game for hackers to use to only never complete due to the coding. So the next you get your mind in the game there could be a chance you can be playing a game that revolutionizes the world.