The Myth of Leprechauns Leprechauns with a pot of gold

Leprechauns, a myth? a folklore? a truth with a fib? We were told the story of them since we were little kids, the story of the little green man who sit at the end of a rainbow protecting their pot of gold but what is a leprechaun and what’s the myth behind them?

First off, what is a leprechaun? Are they truly the green little Irish men we believe them to be? 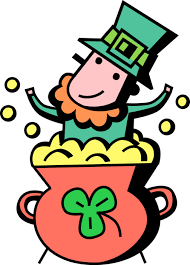 The tale of leprechauns emerged way back in the 8th century, while we thought these creatures were a myth, the belief in them were wide-spread throughout the country of Ireland. The leprechaun was believed to be a fairy-like creature that was created in the Irish mythology. They are known for their mischievous acts or spend their time hiding their pots of gold at the end of rainbows.

We know leprechauns as the little old men who dress in a hat and suit of green, wearing their buckled shoes but that wasn’t always the case. In fact, they were originally depicted as wearing red and were thought of as being dressed in this color for many of years.

Many believed that because of the popularity of the of the color green in Ireland we’ve started to correlate leprechauns with everything green and gold and they became the creature we know and love today!