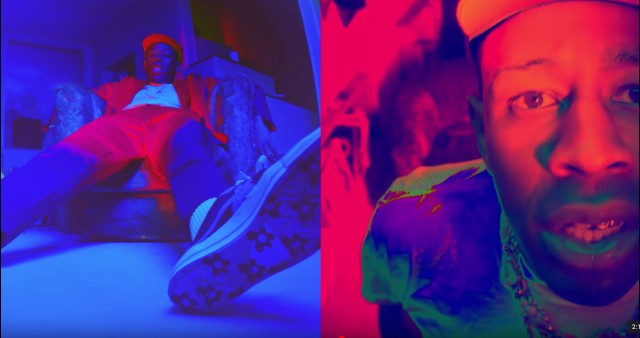 from Tyler the creator on youtube and on spin.com

Tyler, The Creator as of late has been having a great 2018 in his life. Starting with his Grammy nomination for his recent album, Flower Boy. Tyler’s 2018 is only 3 months in and it gets better for him and his fans most importantly.

Despite his collaboration with Converse to make his “Golf Le fleurs” (which means flower Boy). Which are considered to fan, Jeff Sessions who said, “His best collection yet because honestly, Vans did’t do him right”.

Now as of today, on his Youtube channel, he released a new song titled “OKRA”. Tyler promoted it on his Twitter and Instagram to promote it saying,

“OKRA” has been out for a couple hours now and Vincent Gonzales personally says,

“It reminds me of his Bastard days and he even said on his Twitter that the video is low budget”.

Though it is not completely like his Bastard days, the rapping is sort of like it mixed with his new genre of music he is attempting to do and which has gotten him more fans just by only listening to his Flower Boy album and not Goblin nor his best peak album for the fans back in 2011, Wolf. For more proof of this however, in his recent tour it is said he had to help the crowd sing the lyrics to the songs, “Yonkers” and “She” both of which are great songs.

Maybe someday Tyler will win a Grammy, but for now he is happy and so are all of his fans and OKRA is out now and you can listen to it here:

November may have already happened for Tyler, but some can think that this year may be his November.